The Atlantic Branch is an electrified rail line owned and operated by the Long Island Rail Road. It is the only LIRR line that runs in the borough of Brooklyn. 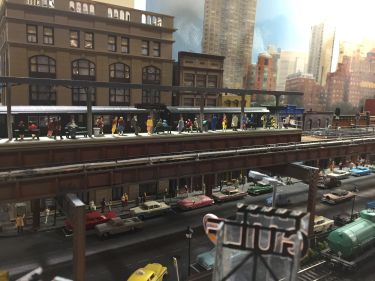 
My intent was to capture the ambiance of Flatbush Avenue, with all the unique signage in front of the stores. The signs on the storefronts on my layout came from internet photos of real stores in Brooklyn, Queens, and Manhattan.  Although an elevated subway does not run above the real Flatbush Avenue, I added one to help create the ambiance of the urban environment. It is automated and can run continuously during operating sessions adding realism to the session.