The Town of Huntington

The Town of Greenlawn in the background. The waterfront area in the foreground.

Jamaica Station is center right. The Town of Huntington is to the left.

Huntington is in the center, with Greenlawn in the background.
The tracks in the foreground lead to Farmingdale .

The City Terminal Zone.
The cutaways in the fascia board show the tracks in the underground tunnel approaching Pennsylvania Station.

The icing platform in Farmingdale

Flatbush Avenue in Brooklyn (before the overhead subway line was added).
Holban Yard is on the right.

Looking west, Flatbush Avenue with the overhead subway added is on the right.
Holban Yard is on the left.

Looking east, Flatbush Avenue with the overhead subway added is on the left.
Holban Yard is on the right.

Looking west at the car float yard in Long Island City .
Manhattan is in the background just across the East River.

Welcome to my Long Island Rail Road (LIRR) Web Site. The railroad is HO scale and occupies about 75% of my basement. It models three branches of the LIRR, namely the Port Jefferson Branch, the Atlantic Branch, and the City Terminal Zone.

Depending on the engines, passenger cars, and cabooses that I put on the layout, the era will change. It can be 1964 when the New York World's Fair was being held in Flushing Meadow, New York, and the LIRR was in the Goodfellow livery of gray with an orange "swoop" on the sides of the engines, or the early 1950's when the LIRR was transitioning to the Tichy light gray paint scheme on the engines and passenger cars, or finally the late 1940's when steam ruled the rails and the passenger fleet was in Pennsylvania Tuscan red.

I started the layout in October of 1988, when we moved into our current house, and I only modeled the Port Jefferson branch between Greenlawn and Jamaica, Queens. In 2005 I expanded into an adjacent 12' x 12' room and modeled the CityTerminal Zone. This consisted of modeling the high rise buildings in New York City, a double track overhead El subway line, and also the trackage that went under the East River into Pennsylvania Station in Manhattan. I modeled Pennsylvania Station, including a cut-away of the underground shopping mall and the LIRR platforms.

In 2015, I expanded yet again into the back half of the finished side of our basement and modeled the Atlantic Branch, which ran to Brooklyn. I have modeled Flatbush Avenue as well as the Long Island City car float yard, car float bridges, and car floats.

The layout started in a 13' x 17' room in my basement. As mentioned above, in 2005 my youngest son went off to college, and it gave me an opportunity to clear both of my sons' junk out of a 12' x 12' basement room adjacent to the original layout. This room became the City Terminal Zone of the LIRR. In 2005 I retired after 42 years of government service, and received permission from management to expand into the back half of the finished part of the basement, roughly an 11' x 20' area. It is in this area I modeled the Atlantic Branch, which included Flatbush Avenue in Brooklyn, Holban Yard, and the car float yard in Long Island City.

While originally designed for just one-person operation, some time ago I became a member of an operations group with nine members. Thus, over the years I have made many track changes to the original track plan in order to make the layout more conducive to operations with up to eight or even nine operators running trains at any given time. I operate using switchlists for local freights to deliver and pick up cars at various industries around my layout and my passenger trains have six stations to stop at and pick up and discharge passengers while traversing the layout.

The layout covers a total of about 310 sq. ft. The mainline is double track, folded dogbone arrangement. A trip around the layout, starting and ending at the same point, is about 300 feet. All track is code 83 Atlas flex track, except Sunnyside Yard, which is code 70. The minimum radius is 24" and the maximum grade is about 3%. Benchwork is all L-Girder and the height is about 50" off the floor. The layout is powered with Digitrax wireless DCC. Many of the sections have lighted buildings, streetlights, and electroluminescent signs, which contribute to some nice nighttime scenes. All roadway crossings have operating automatic flashing crossbucks, and two roadway crossings on the Atlantic branch have automatically operating crossing gates.

The layout has over 800 motor vehicles and over 2000 figures.

I did not intend the layout to be geographically correct nor did I intend it to accurately model any specific scenes or areas. My intent was simply to capture the urban and suburban ambiance of various areas around Long Island and New York City that the LIRR served. For example, my most recent addition models Flatbush Avenue in Brooklyn, but Holban Yard, which is in Queens, is right in front of it. The trackage on my Port Jefferson Branch runs through the Town of Huntington and I have a waterfront scene near the Greenlawn Station. The LIRR actually ran through a town called Huntington Station, which is 3 miles south of Huntington Harbor, and Greenlawn was about 3 miles south of Centerport Harbor. However, I enjoy modeling waterfront scenes, so my version of the LIRR runs near the Long Island Sound waterfront.

I hope you enjoy your visit to my layout. If you have any questions or comments, feel free to contact me at BWSheron@mac.com. 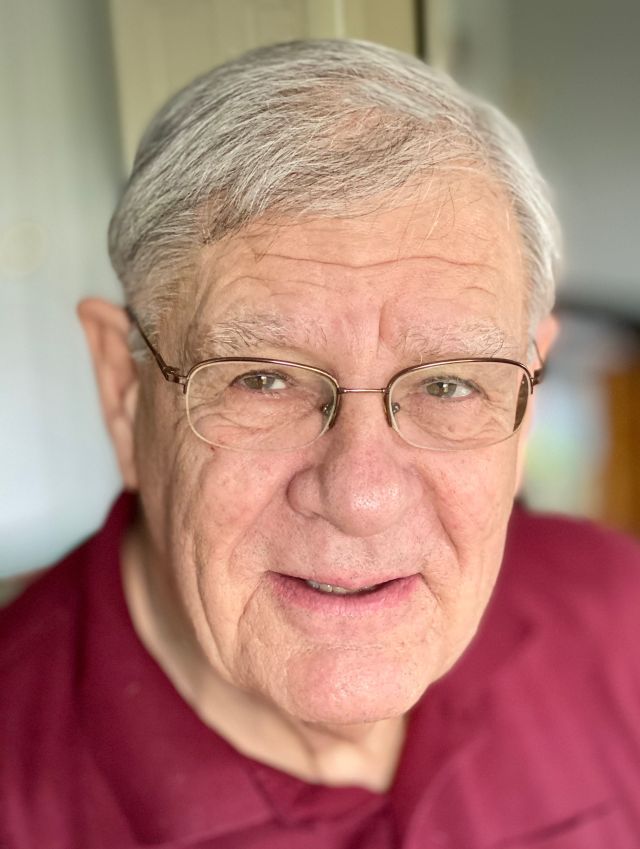 My name is Brian Sheron and I am a native of Huntington, New York, but have lived in Maryland since 1969 and in Poolesville since 1974. I am married and have two sons and one grandson. Professionally I am an engineer, with a B.S in Electrical Engineering from Duke University, and Master's degree and PhD in Nuclear Engineering from the Catholic University of America. I retired as the Director of Research at the U.S. Nuclear Regulatory Commission after 42 years of Federal service in November of 2015.

I have been actively involved with the model railroading hobby since 1980. I model the Long Island Rail Road, circa 1948, 1954, and 1964, in HO scale. I chose those three time periods to model because it allows me to run motive power as well as passenger cars with paint schemes appropriate for those periods. My layout was featured in the September, 1997 issue of Railmodel Journal. I received my Master Model Railroader (MMR) Certificate in 2011.

I belong to an operations group with 9 members, and we meet once a week at a different member's layouts and conduct an operating session for about 90 minutes.

In my spare time, when I'm not working on my trains, I enjoy playing the banjo and play in a local band.